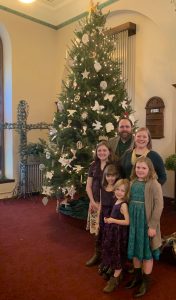 Pastor Kevin Park is a licensed Minister of the Gospel through the Evangelical Association of Reformed and Congregational Christian Churches. He was born and raised in San Diego, California.  Pastor Park completed his undergradute studies at Gonzaga University receiving two Bachelor’s degrees – one in History and the other in Political Science. His pastoral education is from Reformed Theological Seminary in Orlando, Florida. Kevin began gospel ministry with a Las Vegas homeless outreach program, where he preached for several years. Prior to coming to Old Goshenhoppen, he was serving at Spring Meadows Presbyterian Church (PCA) in Las Vegas as an intern pastor.  Kevin is a certified Prepare and Enrich facilitator in both pre-marital and marital counsel, as well as a drug addiction minister through the Genesis Process program.

Kevin and his wife Stephanie have been married since 2006.  They have four children: Katelyn, Audrey, Monica and Bridget and two black labs: Tulip and Chapel. Together, they love community events, bar-b-que, camping, sports, and exploring the history of the East Coast.

Pastor Kevin Park is honored to have been called to serve at Old Goshenhoppen Reformed Church.  If you would like to get to know more about him or the church, please don’t hesitate to reach out. Also if you’re someone who uses Facebook you can find our pastor’s profile by clicking here and you’re welcome to make a friend request.

Doctrinally Pastor Kevin affirms the Heidelberg Catechism – the guiding confession of Old Goshenhoppen Reformed Church. He also affirms the Chicago Statement on Biblical Inerrancy, and he is a signee of the Nashville Statement on Biblical Sexuality. Pastor Kevin also appreciates the wisdom and theology behind historic reformed confessions such as The Belgic Confession, The Canons of Dort, The Westminster Confession of Faith, and the Larger and Shorter Westminster Catechisms.

Rev. Bruce Clydesdale grew up in Philadelphia and met his wife Bobbi in 1975 at her high school dance. They attended Messiah College together in 1978 – 1979. They married in 1981, have 3 children (all married), 2 grandchildren, and 1 furry child.  They lived in the far Northeast section of Philadelphia for 35 years before moving to Upper Salford in 2019 at the Lord’s leading.  He retired from a 30 year career in Information Technology from the Philadelphia Gas Works (PGW) in 2011.  He was a Sunday school teacher (from child to adult) in the 80’s and 90’s. He did Youth Ministry for 15 years with Christian Endeavor and in several local churches. He has been a leader, and participated, in the Walk to Emmaus program since 1994.  He graduated from Eastern Baptist Theological Seminary in 2005 and has been a guest speaker and preacher in over two dozen churches since 1995.  He has been preaching at Mayfair Presbyterian Church nearly every Sunday since 2008.  He served as a Chaplain, teacher, and IT consultant for the Sunday Breakfast Rescue Mission for 8 years.  He was ordained a Minister of the Word & Sacraments in the Evangelical Presbyterian Church in 2013.  He was the transitional pastor for Manoa Community EPC from 2017 – 2018.  He became associate pastor of Old Goshenhoppen Reformed Church in November, 2019.